Daily life as a basis for planning cities

Discussing Gender and Culture during the Open Week on Diversity […]

“Our societies have been steered by the concept of autonomous, isolated human beings, and the more independent they are, the better. But human beings are both ecodependent and interdependent. This means that we are part of a common environment, the same planet – and we must take good care of it. We depend on each other and must also care for each other.”

Opening the presentation by Zaida Muxí on Monday, April 19, at UIA2021RIO, this comment steered the discussion on Gender and Culture with Gabriela de Matos, moderated by Tainá de Paula. These three architects talked about the ideal of cities of well-being, the important roles played by women in the construction of these cities, and the organisational potential of all this, among other issues.

Zaida Muxí stressed that “care is the basis of life”. Historically, this has always been attributed to women and has always been undervalued. However, this should be a task for everyone, proudly acknowledged. She added that urban’s space should reflect and bolster these caring activities, with greater autonomy and freedom for human beings.

The care mentioned by this Argentine architect, who has lived and worked in Spain for more than thirty years, are activities involved in everyday life. She stressed that “everyday life must make the city its own”. She then presented several examples of urban interventions in Barcelona, intended to recreate public spaces. She notes that all urban proposals in the Catalan capital have been drawn up from a gender standpoint since 2017; in 2020 and 2021, about fifty hectares were removed from use by automobiles and repurposed for simply being, walking, getting together and recreation. “Not commercial or productive spaces, they are also not places for vehicles, but are instead areas set aside for everyday life.” 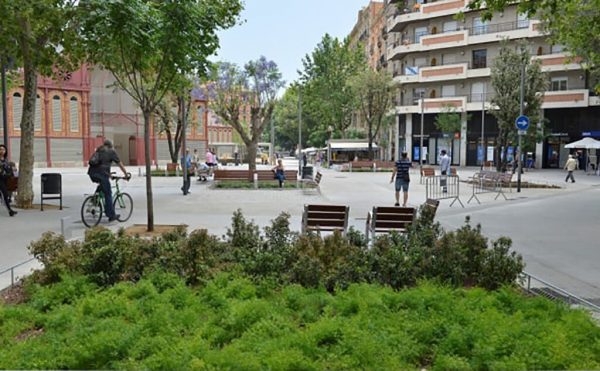 Spaces for daily life in Barcelona

The creator of the Black Women Architects Project that is mapping out the current activities of Brazilian black women in Architecture, Gabriela de Matos commented on the “historical hostility of cities towards black women”. She pointed out that: “we are not producing solutions for the daily life we know so well”.

There are many different reasons for this, ranging from access to architecture training, educational content, and labour market discrimination. “Although many black women architects from poverty-stricken outlying suburbs have the ability and wish to work in these places, much of Brazil’s architecture training focuses on taking care of the elites,” she said. She also noted that there are few studies exploring the work of female architects (the references are almost always male) and practically nothing is presented on architecture within the African matrix (except for the course at the Federal University of Bahia).

Gabriela also talked about the wage gap: “Most black women architects are unemployed or earn up to two minimum wages. The average income of a black woman architect is half that of a white male architect.”

Her presentation prompted questions about the organisational abilities of women for transforming cities. Zaida Muxí said the progress in Barcelona is the outcome of many decades of efforts.

Breaching discussion protocol, Zaida asked moderator Tainá de Paula (who is a City Councillor in Rio de Janeiro), about opportunities for transformation) based on her political actions. Tainá pointed out the hurdles and challenges she faces on the City Council, recalling the murder of Councillor Marielle Franco – who denounced racial bias and gender oppression – but said that the goal of reviewing of Master Plan for the City of Rio de Janeiro is to include specific chapters on racial and gender equity in urban planning.

Mentioned by Gabriela de Matos, the Organisation Now! slogan – coined by Lélia Gonzalez, a philosopher, anthropologist, teacher, writer, and activist in the black and feminist movements, – was addressed again at the end of the discussion, mentioning other meetings, exchanges and initiatives undertaken by women for creating fairer and healthier cities.

To watch the debate, visit: