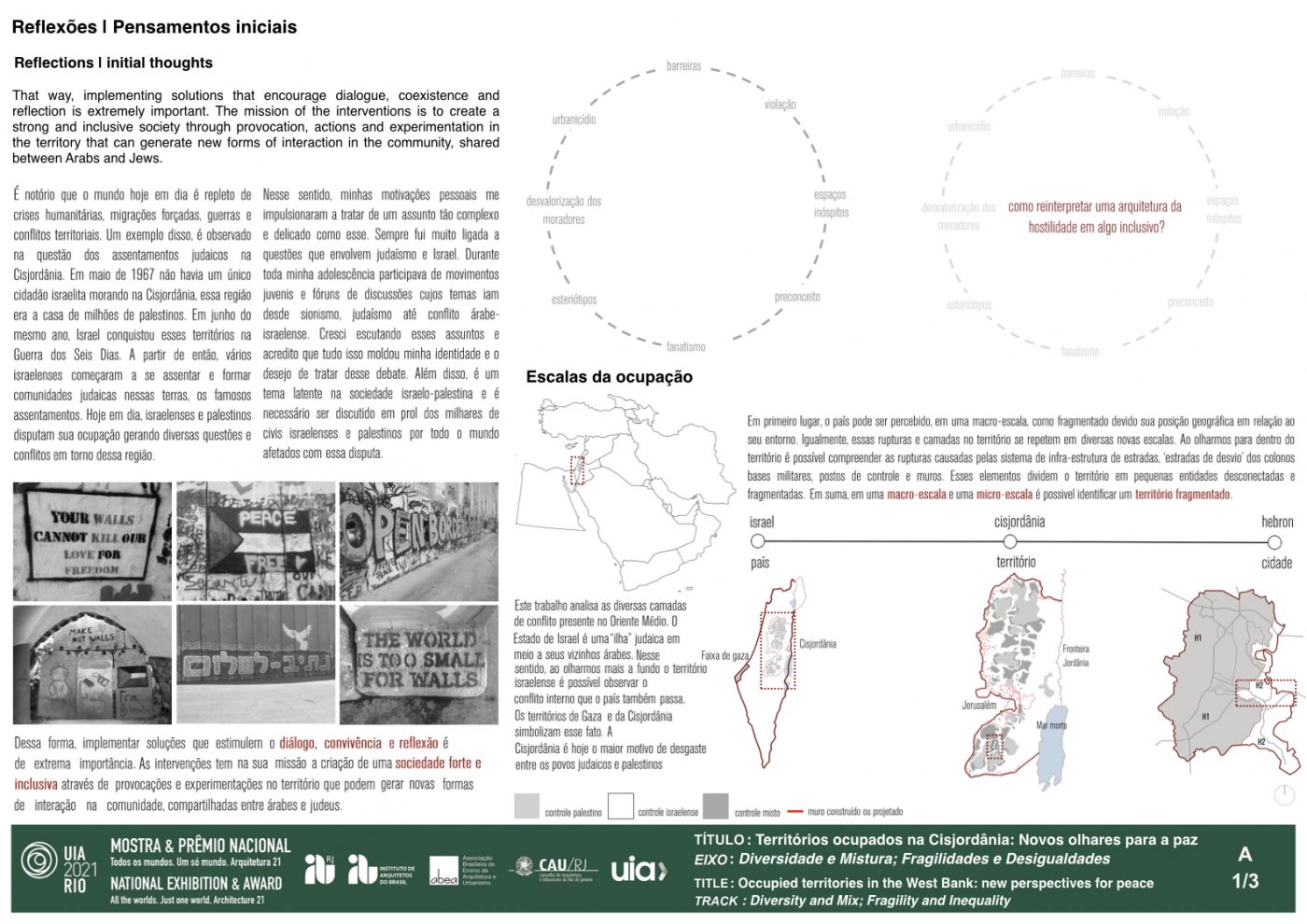 Occupied territories in the West Bank: New perspective for peace

It is well known that the world today is surrounded by humanitarian crises, forced migrations, wars and territorial conflicts. See, for example, the issue arising from the Jewish settlements located in the West Bank. Until May 1967, there was not an expressive number of Israeli Jews living in the West Bank, mainly because this region was home to millions of Palestinians. However, in June of the same year, Israel conquered that territory in the Six Days War. From then on, several Israeli Jews began to populate and form Jewish communities in these lands, leading to the creation of the famous settlements. More than 50 years later, Israelis and Palestinians compete for for their occupation, generating several issues and conflicts around this region.

Proposing a reflection on the territorial conflicts that have occurred in the Middle East, mainly in the West Bank, is urgent. The battle between Israeli Jews and Palestinian Arabs is not a religious war, but a geographical war, where the big question is: whose land is it. Throughout history, Arabs and Jews have been persecuted and driven from their homes, but despite the similarities of their stories, the parties are limited to a short-sighted view, seeing only who were their oppressors and persecutors. In order to combat this short-sighted view, it is imperative to implement solutions that encourage the dialogue, coexistence and peace between the two agents. The project presented here has as mission the creation of a strong and inclusive society through actions and experiments in the territory that are integrated into territories shared between Arabs and Jews.

In this scenario of war, this work seeks to analyze the different layers of conflict present in the Middle East. The State of Israel is a Jewish "island" surrounded by "seas" of Arab neighbors, just waiting for the attack. The eternal disputes for and within the territories of Gaza and the West Bank substantiate this statement. More specifically, the West Bank is currently one of the biggest reasons for the wars between the Jewish and Palestinian people. On one hand, Palestinians consider themselves the inhabitants of the region because for many centuries many of their ancestors lived and cultivated land in the West Bank. On the other hand, as the Jews conquered the territory, they understand that they should be able to live there permanently. The problem created by these visions is one: for the Palestinians, Jewish settlements located in the West Bank were built on supposedly stolen land.

Turning to an urban analysis, Israel can be perceived, on a macro scale, as fragmented due to its geographical position, mainly considering its surroundings. Likewise, these ruptures and layers in Israeli territory are repeated at several new scales. When looking inside the country, it is possible to understand the disruptions caused by the road infrastructure system, ‘diversion roads’ by the colonists, military bases, settlements, checkpoints and walls. These elements divide the territory into small, disconnected, and fragmented entities, hindering the social and economic insertion of Palestinians in Israeli society. Finally, Hebron, a practical example that represents, albeit on a smaller scale, what happens throughout Palestine, due to its internal division. It becomes a synthesis of the entire conflict in territorial terms. From the above, it is evident, both in macro and microscale, that we have a fragmented territory.

In this way, the situation found in the Middle East and, more specifically, in the State of Israel, is also reflected in the reality of the West Bank. More specifically, the city of Hebron will be analyzed. In addition to being the largest Palestinian city, it is also considered the second most sacred city for the Judaism, right after Jerusalem, as Jewish patriarchs would be buried there. This is added to the common practice of orthodoxies seeking to settle in “sacred lands”, such as where their patriarchs are buried, which makes the issue even more complex.

Seeking to come up with a solution, the treaty, Hebron Protocol of 1997, was made, which divided the city into two sectors: H1, controlled by the Palestinian Authority, and H2, administered by Israel. The Old City of Hebron is completely fragmented by the presence of physical barriers, closures, military zones and settlements. These occupation policies prohibit freedom of movement and stifle Palestinian social and economic life. It is common to find empty streets, watchtowers, barriers and protective screens in the landscape of Hebron.

Due to this complex occupation policy, Hebron is transforming itself into two completely different cities. The areas H1 and H2 are distinct, divided by physical elements. The lack of commercial activities led to the mass evacuation of residents of the area, which transformed the Old City into an almost empty neighborhood controlled by the Israeli army.

Therefore, when considering the chaotic and hostile context of the chosen location, the need arises to think of actions that encourage mediation. Recognizing the memory of segregation imposed by all the elements that make up space was an important step in the process of studying these components.

Initially, there is a desire to appropriate these pre-existing structures so that they can be reinterpreted. Thus, in the long term, the project works to revitalize the city of Hebron, restoring its vitality and enabling a more harmonious coexistence between the parties involved. The starting point for such actions was the city market, popularly called "Shuk" in Israel. In it, the two peoples lived side by side selling their goods ranging from spices to silverware.

The vegetable market that existed there was an important junction of the main street, Al-Shuhada. The building located there served as the main warehouse, supplying several stands around it, located in the open and under roofs built nearby. The area used to be connected to the Old City through small streets located in the urban fabric. Currently, this area is the main entrance to the Avraham Avinu settlement, making it one of the most highly controlled areas. Across the street is an observation point. It consists of a tall, solid watchtower, an entrance gate and soldiers protecting the entrance to the area. Even though the gate structure only restricts vehicles from entering the area, in practice it closes the road for any Palestinian passage.

From this, the proposal uses the idea of ​​the frame as an opportunity to frame the city, shaping different visuals. The idea is to establish a new relationship between a resident and the situations that surround him, where he can have an active and analytical role in the city, and all this results in an architecture of mediation. Interventions range from mobile panels capable of proposing reflections through narratives, photographs and personal stories, stairs capable of generating new perspectives, with panoramic views over the militarized city and its structures of constant control, libraries in which the power of transformation is concentrated in the books and subtractions on walls where you can see and be seen and recognize who is beside you.