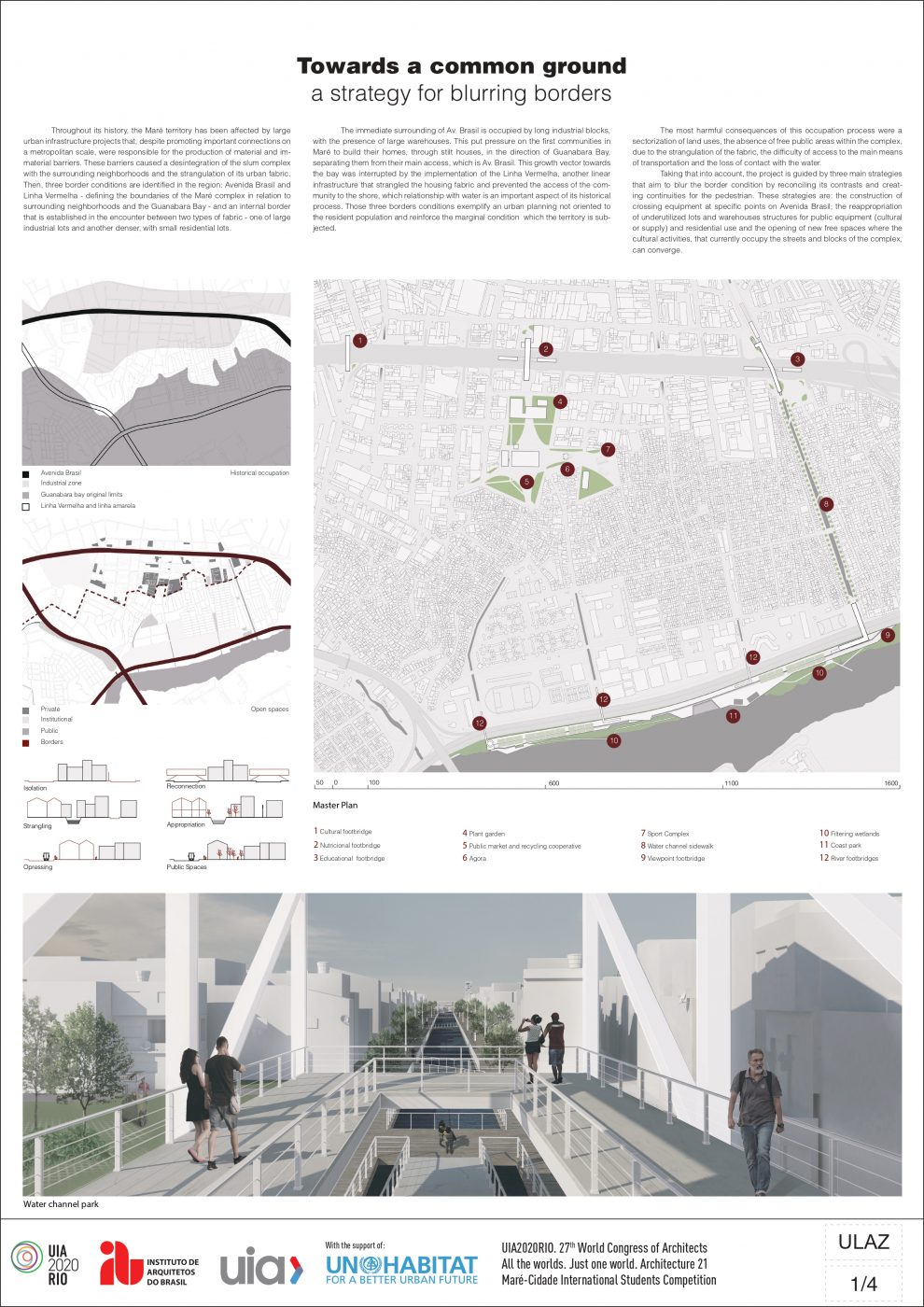 Towards a common ground a strategy for blurring borders

Throughout its history, the Maré territory has been affected by large urban infrastructure projects that, despite promoting important connections on a metropolitan scale, were responsible for the production of material and immaterial barriers. These barriers caused a disintegration of the slum complex with the surrounding neighborhoods and the strangulation of its urban fabric. Then, three border conditions are identified in the region: Avenida Brasil and Linha Vermelha - defining the boundaries of the Maré complex in relation to surrounding neighborhoods and the Guanabara Bay - and an internal border that is established in the encounter between two types of fabric - one of large industrial lots and another denser, with small residential lots. Those three conditions exemplify an urban planning not oriented to the resident population and reinforce the marginal condition which the territory is subjected. The most harmful consequences of this occupation process were a sectorization of land uses, the absence of free public areas within the complex due to the strangulation of the fabric, the difficulty of access to the main means of transportation and the loss of contact with the water.

Taking that into account, the project is guided by three main strategies that aim to blur the border condition by reconciling its contrasts and creating continuities for the pedestrian. These strategies are: the construction of crossing equipment at specific points on Avenida Brasil; the reappropriation of underutilized lots and warehouses structures for public equipment (cultural or supply) and residential use and the opening of new free spaces where the cultural activities, that currently occupy the streets and blocks of the complex, can converge.

The crossing equipments are designed to connect the inside with the outside of Maré’s complex. For Av. Brasil, the main neighborhood mobility axis, three programmatic crossings are proposed - cultural, nutritional and education - connecting public open spaces and linking with BRT modes. For the Linha Vermelha, the crossings cross the expressway in continuity with the requalified public space on the marginal areas of the four channels that flow into the Guanabara Bay, with the intention of reconnecting the community with the water.

On the internal border, a reappropriation of the warehouses and parking areas proposes new uses that qualify the neighborhood for residents and generates a cyclical movement between production, consumption, disposal and reuse, in addition to new housing typologies. The free spaces created at the three borders seek to rebalance the built and green areas and enhance the public space appropriation logic that already happens in the neighborhood.