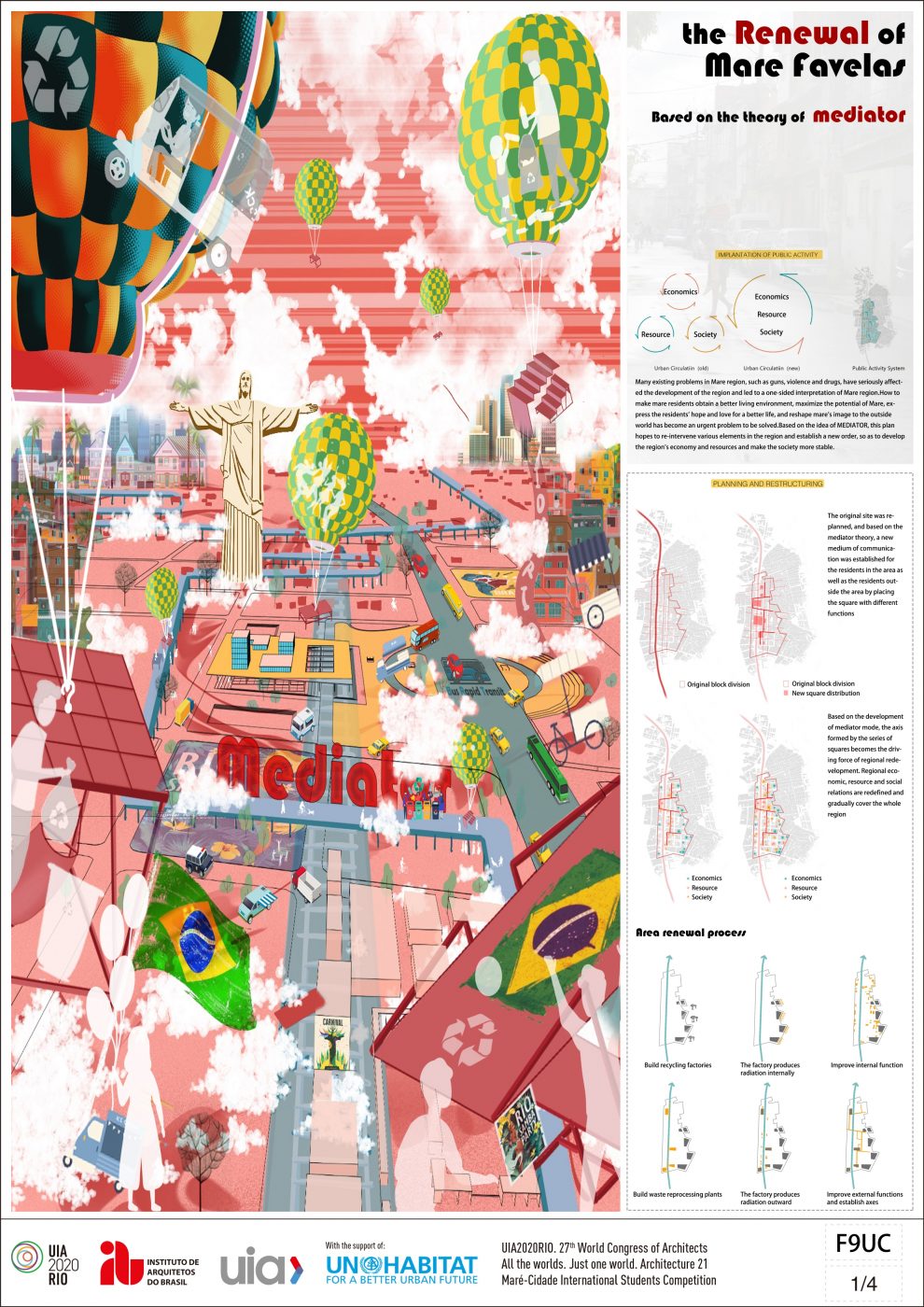 The Renewal of Mare Favelas: Based on the theory of mediator

Many existing problems in Mare region, such as guns, violence and drugs, have seriously affected the development of the region and led to a one-sided interpretation of Mare region.How to make mare residents obtain a better living environment, maximize the potential of Mare, express the residents' hope and love for a better life, and reshape mare's image to the outside world has become an urgent problem to be solved.Based on the idea of MEDIATOR, this plan hopes to re-intervene various elements in the region and establish a new order, so as to develop the region's economy and resources and make the society more stable.

The objects of the existing pattern in MARE are directly related to each other, and the integration of the social behavior of the interaction between objects leads to the excessive coupling of the system.And the system can affect all objects because of other factors or the involvement of objects (such as drug dealers/police).

By introducing the mediator mechanism, the network structure of the original system is transformed into a star structure
centered on the mediator.Under the new mechanism, the link between the objects is established by a mediator.The relationship between objects is simplified and orderly, and the objects are independent of each other.The system is not affected by any one factor or object.

In the new plan, an connecting the three public squares overhead axis and public installations placed near the axis, produced by the garbage recycling plant, act as mediators.

People from the outside world (objects) and residents in the MARE area (objects) re-established social contacts through
different public facilities (mediators), in which contacts between objects were simplified through mediators and the interaction between different objects was reduced. The three public squares depict scenes of three different atmospheres

Everyone comes from somewhere else,and everyone goes somewhere else
Transfer plaza is located in the center of the entire site, is a busy traffic and commercial integrated place, with BRT station and MOTOTAXI stations, the advantage of public transportation, it connects the MARE areas inside and outside the region, the site contains the largest population differences and cultural differences, is MARE reintegration into the city in the region and city to understand and inclusive MARE areas "trigger", is to respect and embrace the embodiment of the city of multiculturalism and diversity.Set against the background of a garbage recycling plant, the area hosts the social and business activities of a variety of professionals involved in the development of new industries.Workers, enterprise managers, investors and even visitors to see their new industry will come to the first place, with complex crowd, the place is an open compound synthesis, set the labor market, commercial complex, hotels, cafes, bars, display of underground waste recycling industry in tunnel, factory building and so on a series of functional areas.The advantages of convenient transportation made MARE a thriving regional hub and an important link in MARE's reintegration into the city.

More than a Samba
The civic Square is located at the southernmost end of the site, near the school on the south side.The civic Plaza is a reinterpretation of the culture, arts, entertainment and history of the MARE area.The main axis passes through the center of the civic Square and connects it with the other two squares to form a whole.The MARE Museum is connected to the axis, while a samba stage, public school, craft workshop, museum and community cinema enrich the function of the plaza, providing cultural entertainment for residents, students and children of the MARE area, as well as a place for visitors to learn about the arts and culture of the MARE area.The entire area is a public place where cultural events are held to promote the spiritual civilization of the people of the area, an important means of reintegrating the MARE culture into the urban culture of Rio DE Janeiro.The combination of public space and public transport further promotes the dissemination of regional culture.