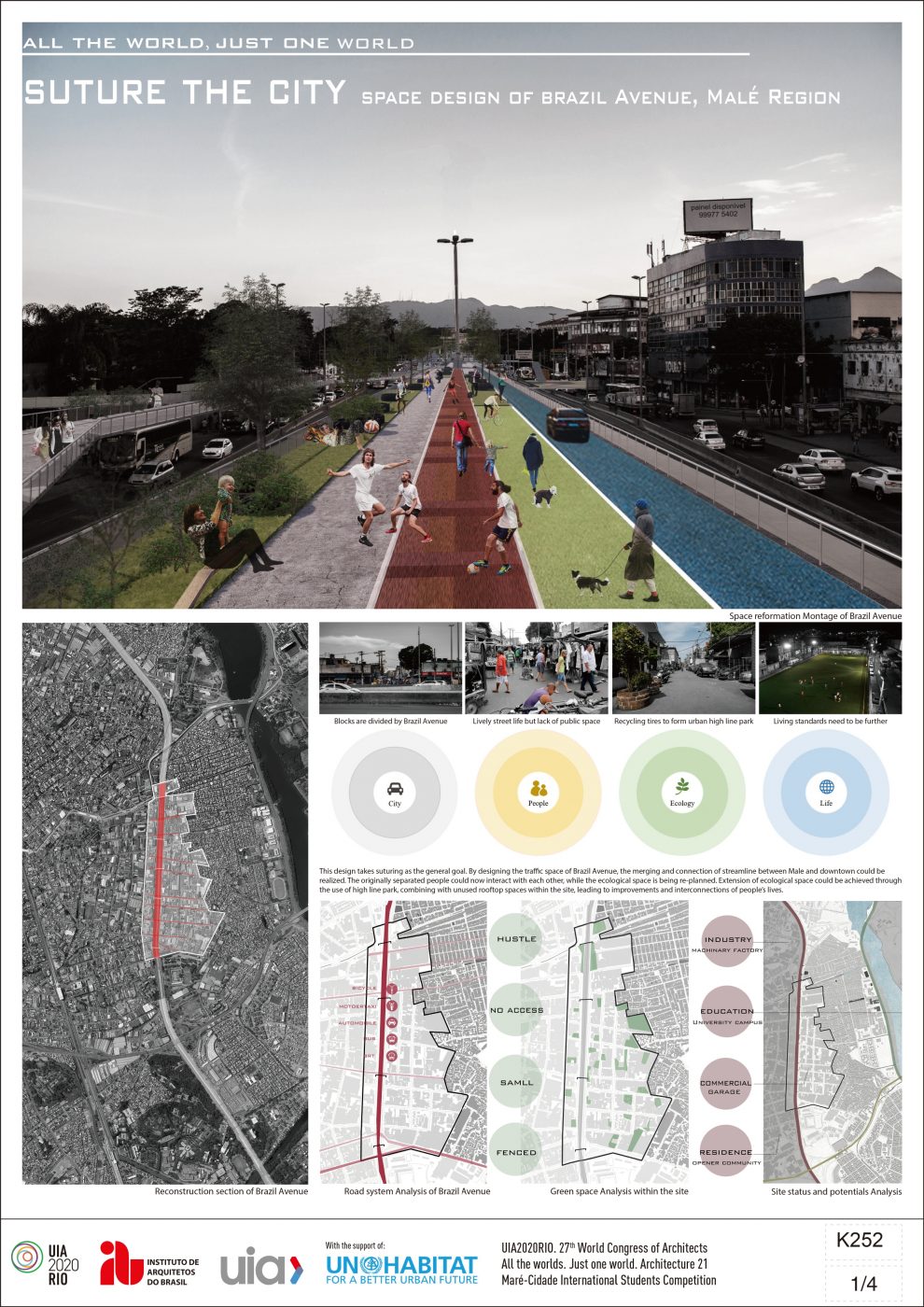 Abstract: This design takes suturing as the general goal. By designing the traffic space of Brazil Avenue, the merging and connection of streamline between Male and downtown could be realized. The originally separated people could now interact with each other, while the ecological space is being re-planned. Extension of ecological space could be achieved through the use of high line park, combining with unused rooftop spaces within the site, leading to improvements and interconnections of people’s lives.

"As a great city, we need beautiful buildings, but it's not right to pursue the magnificence of buildings. In many excellent cities, their greatness lies in the ground. Therefore, pedestrian system is the focus of urban landscape planning" — Edward Stone

The way of suturing is accomplished through the design of streamline, which depends on the realization of space. Therefore, we try to transform the original one-dimensional linear space on Brazil Avenue into three-dimensional traffic, which is east-west, north-south and vertical. Following this principle, we classify and combine pedestrian traffic, vehicle traffic and motor vehicle and non-motor vehicle streamline, and realize the better interaction between people and vehicles with the help of the design concept of complete street.

We hope to start from people's point of view in design, such as residents in slums, workers in waste industrial areas, homeless people on streets and urban residents crossing on Brazil Avenue. Although they live in different worlds, they are still in the one world. Obviously, the status quo is not satisfactory, for Brazil Avenue looks down on this area from the perspective of a city planner or other residents in the city without response to the zone around it.

From the indifferent bystanders passing by to the appreciative and communicators who fully respect each other with goodwill, Brazil Avenue, as the medium of contact between them, determines whether this change is possible, and through our analysis, discussion and design, we have turned this communication into reality.

3. Integration into the urban environment;

We want to realize the effective combination of urban ecological space, community ecological landscape and life, so we created a high line park located on Brazil Avenue as one of the city's landmark landscapes and he roof space is also included in our design. Through the effective connection between high line park and platform, we make it possible for the interaction between urban people and community residents.

There are a lot of discarded rubber tires in the zone, and if they are directly thrown into the environment, it is undoubtedly a kind of pollution, but it is a better choice to recycle them to plant plants and become a part of greening. At the same time, roof garden and high line park are also conducive to reduce building energy consumption.