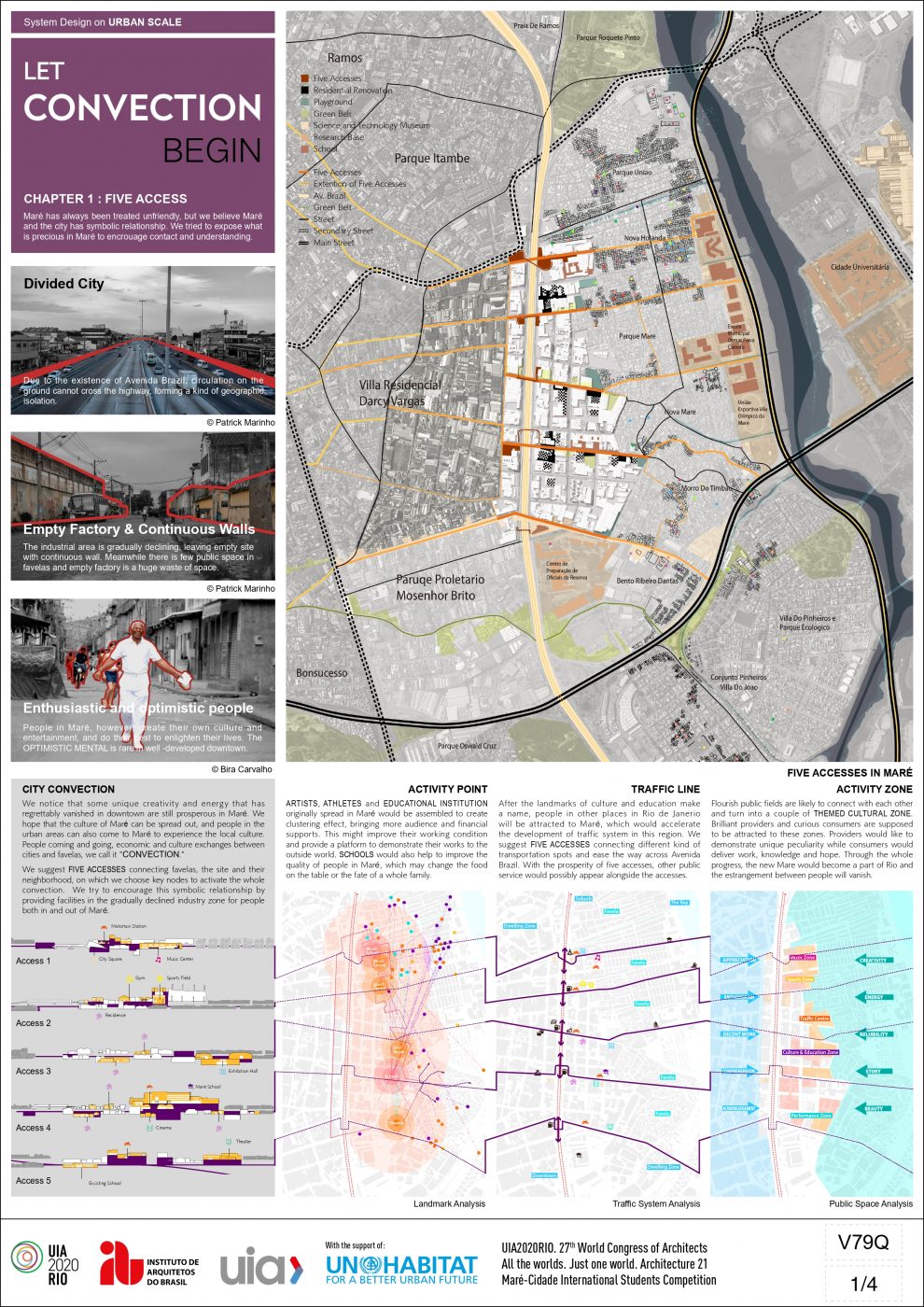 Our Concept is “Let Convection Begin”. We see the site and Maré as an inseparable part of the city. We notice that some unique creativity and energy that has regrettably vanished in downtown are still prosperous in Maré, such as street Samba, experimental rap music and folk competitions, which differs Rio de Janerio from other cities. We hope that the culture of Maré can be spread out, and people in the urban areas can also come to Maré to experience the local culture. People coming and going, economics and culture exchanges between cities and favelas. We call it "convection." We try to encourage this symbolic relationship by providing facilities in the gradually declined industry zone for people both in and out of Maré.

We suggest five accesses connecting favelas, the site and their neighborhood, on which we choose key nodes to activate the whole convection. First, we suggest transform five different industrial factories near the favelas into cultural and educational landmarks, integrating public power to develop and demonstrate precious peculiarity in Maré. Through five accesses, people living in the neighborhood will be attracted to the landmarks, which encourages public space developing alongside the accesses. With the public space growing and connecting with each other, the whole region will no longer be the old image that she has always been known as, but a shining label of Rio de Janerio.

Renewal plan starts with analysis of existing plants in the site. We found out that according to the condition of the plants, they can be divided into three categories. The plants in the east is large-scaled and the structure needs to be strengthened. Over half plants in the middle are long and narrow row plants, most of which are vacant. In the west there are shops and hotels but they are separated by Avenida Brazil from the other side.

We analyze the conditions and plan three different refurbishment strategy for the three regions. Large-scaled plants are planned to be the landmark, containing abundant people. They could be recognized easily from Avenida Brazil as well. Long and narrow row plants will be transferred into residences for more public space. In the west, we set bridges for pedestrians and motorcycle to connect both sides, creating public square at the same time.

With the residence in the row plants finished, residents are suggested to move into their cozy and secure new home, while the original favela house could be vacated for more public space in Maré. This would enlarge the space alongside the accesses, in which more activities can be held and created. Some of them could be used as markets and business activities and the streets would not be occupied anymore. Some may become a music square where folk musicians could release their works. Tourists and neighbors are also part of the harmony scene.

We also tried many ways to minimize the effect to the environment. Landmarks would be all refurbished rather than rebuild according to their existing condition, with no touch of the original structure except strengthening it. The residence is modularized and can apply to most vacant plants. We believe the tiny flap of the butterfly is able to cause a massive convection in the city.

We transform the existing environment and substantially improve the quality of the Maré in terms of education, transportation, and housing. We plan to promote the relationship between Maré and other places in regional, cultural, and economical dimension. Let convection begin.