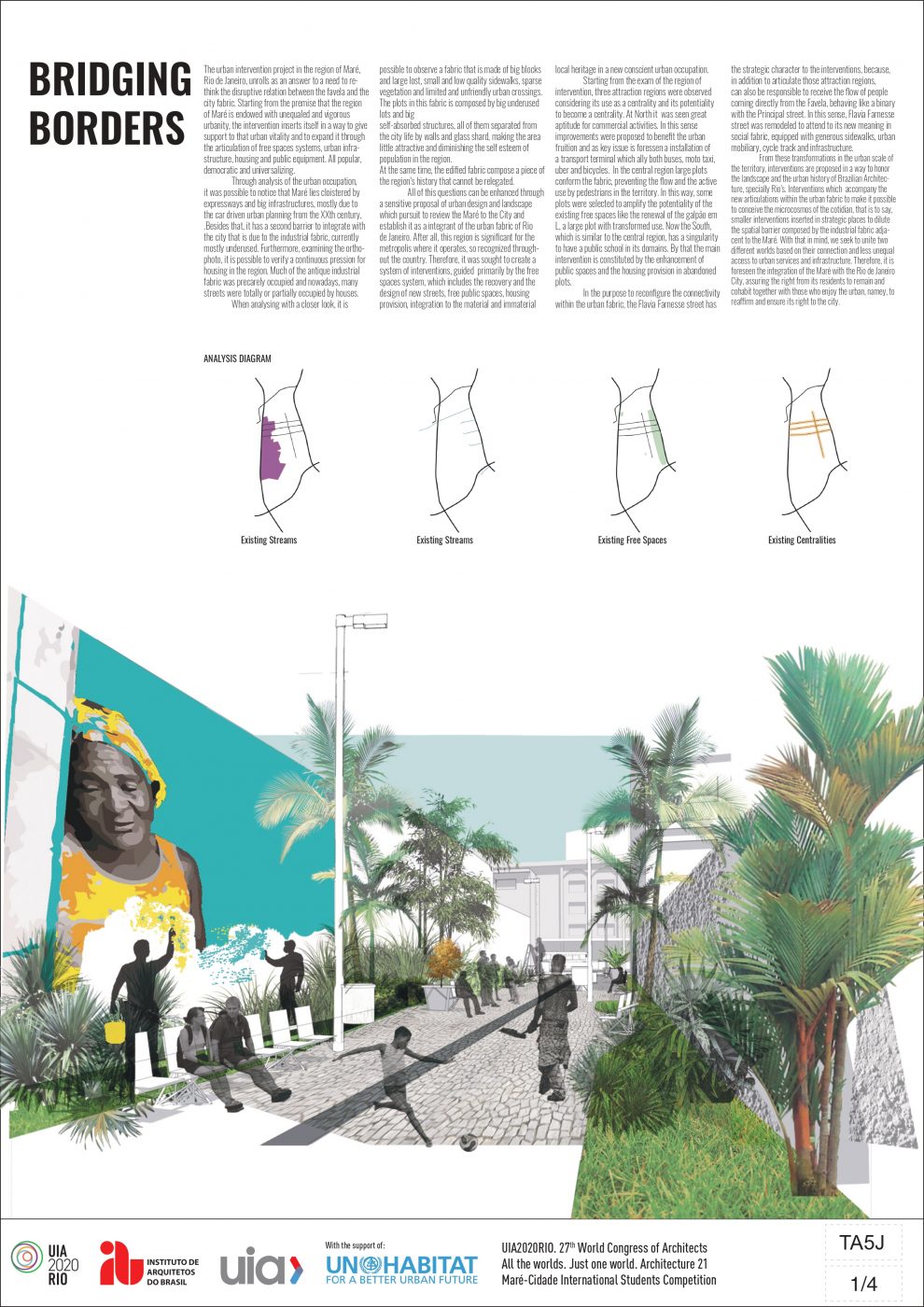 The urban intervention project in the region of Maré, Rio de Janeiro, unrolls as an answer to a need to rethink the disruptive relation between the favela and the city fabric. Starting from the premise that the region of Maré is endowed with unequaled and vigorous urbanity, the intervention inserts itself in a way to give support to that urban vitality and to expand it through the articulation of free spaces systems, urban infrastructure, housing and public equipment. All popular, democratic and universalizing.

Through analysis of the urban occupation, it was possible to notice that Maré lies cloistered by expressways and big infrastructures, mostly due to the car driven urban planning from the XXth century. Besides that, it has a second barrier to integrate with the city that is the industrial fabric, currently mostly underused. Furthermore, examining the orthophoto, it is possible to verify a continuous pression for housing in the region. Much of the antique industrial fabric was precarely occupied and nowadays, many streets were totally or partially occupied by houses.

When analysing with a closer look, it is possible to observe a fabric made of big blocks and large lots, small and low quality sidewalks, sparse vegetation and limited and unfriendly urban crossings. The plots in this fabric are composed by big underused lots and big self-absorbed structures, all of them separated from the city life by walls and glass shard, making the area little attractive and diminishing the self esteem of population in the region. At the same time, the edified fabric compose a piece of the region’s history that cannot be relegated.

All of this questions can be enhanced through a sensitive proposal of urban design and landscape which pursuits to review the Maré to the City and establishes it as an integrant of the urban fabric of Rio de Janeiro. After all, this region is significant for the metropolis where it operates, so recognized throughout the country. Therefore, the intervention can be seen as a bridge that unifies borders that were not able to connect, an intersection between spaces that coexist but cannot share its social realm. It was sought to create a system of interventions, guided primarily by the free spaces system, which includes the recovery and the design of streets, public spaces, housing provision and the integration to the material and immaterial local heritage in a new conscient urban occupation.

Starting from the exam of the region of intervention, three attractive areas were observed considering its use as a centrality and its potentiality to become a centrality. In this sense, the interventions were directioned to attend those nucleus, ensuring the right type of mediations for each region.

In the purpose to reconfigure the connectivity within the urban fabric, the Flavia Farnesse Street has a strategic character to the interventions, because, in addition to articulate those attractive regions, it can also be responsible to receive the flow of people coming directly from the Favela, behaving like a binary with the Principal Street. In this sense, Flavia Farnesse Street was remodeled to attend to its new meaning in the social fabric, equipped with generous sidewalks, urban mobiliary, cycle track and infrastructure.

From these transformations in the urban scale of the territory, interventions are proposed in a way to honor the landscape and the urban history of Brazilian Architecture, especially Demetre Anastassakis and his contribution to popular housing. Interventions which accompany the new articulations within the urban fabric to make it possible to conceive the microcosmos of the cotidian, that is to say, smaller interventions inserted in strategic places to dilute the spatial barrier composed by the industrial fabric adjacent to the Maré. With that in mind, we seek to unite two different worlds based on their connection and less unequal access to urban services and infrastructure. Therefore, it is foreseen the integration of the Maré with the Rio de Janeiro City, assuring the right from its residents to remain and cohabit together with those who enjoy the urban, namey, to reaffirm and ensure its right to the city.