A Masterclass on Connection, Integration, Articulation and Warp-Threading

When two great masters meet, the discussion naturally turns into […]

When two great masters meet, the discussion naturally turns into a masterclass. And the meeting on Wednesday, March 24 was truly magnificent, bringing together two illustrious architects – Jorge Mario Jáuregui and Alejandro Echeverri – in a conversation moderated by the editor of Projeto magazine, Evelise Grunow.

Argentinian Jáuregui opened with a term, a verb, a concept that he uses frequently to refer to the work of the urban architect: urdimbrear. ”Literally: to string the warp threads along a loom; figuratively: to connect, to allow continuity, to make cities, weaving urban fabric,” he explained in a philosophical and almost poetic tone.

This is no easy task. It requires knowing how to read reality and create links between the existing old and the proposed new, he explains. According to this master architect, one of the strategies is the reconfiguration of core factors, “Starting out from what is already in place, strengthening them and introducing new ones, which will completely resignify places.”

As an example, Jáuregui presented some of his extensive collection of favela upgrade projects in a wide variety of sizes, including the famous Rio da Pedras, Rocinha, Vidigal, Manguinhos and Alemão Complex projects, all in Rio de Janeiro. With over 80,000 inhabitants, he highlights one of the impacts of installing a cable car in the Alemão Complex: “the drug trade lost its headquarters, a bunker that was right on top of the hill – a place that was once largely inaccessible and then saw more traffic than Christ the Redeemer.”

These projects were implemented through government programmes over the last thirty years. More recently, this architect designed an upgrade project for the Domingo Savio neighbourhood in Santo Domingo, the capital of the Dominican Republic. Located on the banks of the Rio Ozama river, this neglected area was home to some 1,400 families, living in unhealthy conditions and constantly threatened by flooding and contamination. 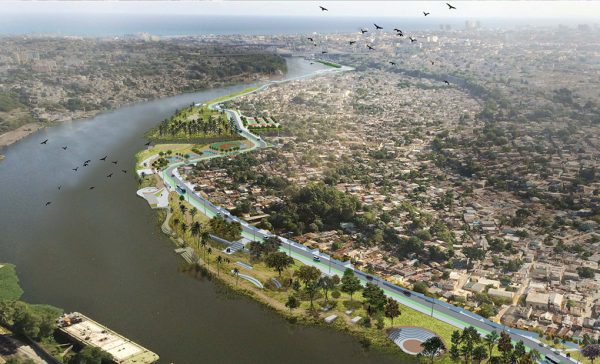 There are many experiences, many stories arising from every project. “This is what architecture is about: helping build stories,” noted Echeverri, after his colleague’s presentation. It was then the Colombian’s turn to tell his gripping tales about the initiatives that transformed his hometown of Medellín.

He displayed a map with a yellow line that still today separates the San Javier neighbourhood from the Comuna 13 community, once of the largest and most violent slums in Colombia.” Imaginary but also physical, these boundaries are challenges in several Latin American cities. The question is: how can they be removed, achieving integration through social and civic processes backed by public policies?”

Echeverri talked about key aspects of his project designs: public spaces, transport, education, which he defines as “connecting elements”. He also explains that he studies citizens’ itineraries, with the possibility that urban design might be able to steer behaviours and trigger multiple impacts. He also highlighted the importance of alliances between the private sector, the public sector, the academic world, and the community: “after fifteen or twenty years, you can see the projects that survived are the initiatives with the most allies, actors, implemented through communities and with multiple voices”.

A good example is the new Paseo Carabobo boulevard, a structuring thoroughfare running between the  Parque Explora park (another Echeverri project) and the Botanical Gardens, the Parque Norte park, the Centro Cultural Moravia culture centre and the Parque de los Deseos park.” Today it is a stage for events, a place of social interaction, which is wanted for Medellín,” says this architect. 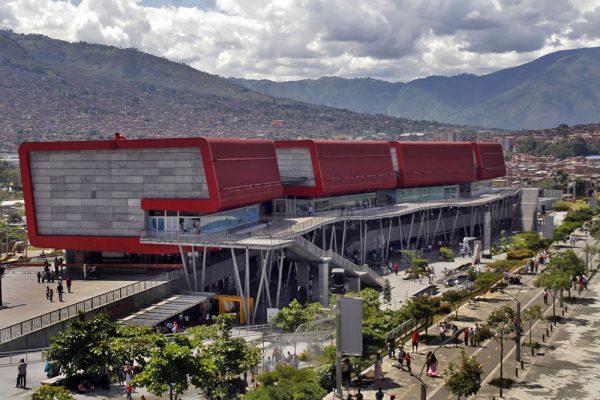 Summarised by Jáuregui, “This is a convergence that pumps up potential”. Following on from his line of thought, he urged that town planning must work hand-in-hand with the economy. Going even further, he discoursed on the XXI century agora, which will cluster work, culture, and education together, for the coexistence of differences. He believes that the role of the architect is to be an “articulator of differences.”

In contrast, Echeverri stressed the boundaries and challenges for practitioners in this field: “We are working in a time of transition and we must make room to build a distinct profession; we will not construct static finished images, but rather processes that are dynamic.” He believes that the architect’s training must move steadily towards cooperative and flexible processes, underpinned by new technologies.” But there still remains the challenge of generating intergenerational dialogues that link the value of youth with that of more experienced practitioners.”

Featuring many other viewpoints and in-depth reflections, it is well worth watching this discussion from start to finish. It is available until Sunday at: